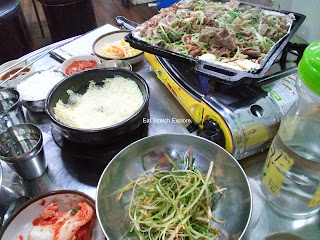 Shipwonjip 십원집 is a well-established restaurant (more than 49 years in operation) known for its charcoal briquette-fired meats and is conveniently located in central Seoul.

It has been featured on numerous television programs. While I was planning the itinerary for my parents' visit to Seoul, I knew they would want to have Korean barbecue, so I did my typical 맛집 research and found this gem.

Actually, many of my Korean friends had never heard of this restaurant before I showed them the link. I know at least one has tried it since I found it and has said that the bulgogi is one of the best she has ever eaten. On top of that, I recommend it AND numerous TV programs AND it's long history tells you that it is pretty darn good. If that's not enough, I am guessing that it is probably featured in some Japanese guidebook because in the time we were there, at least 2 different groups of Japanese people came into the restaurant.

I think it looks like I am a major carnivore, but I swear I'm not. It's just that when you are showing people around Seoul and Korean food, meat is unavoidable and I am pretty picky with my carnivorous tendencies. That being said, I only show people the best meat restaurants, so trust me, this place is good.

There are three options for meat: samgyupsal, the quintessential Korean meat, pabulgogi (green onion bulgogi), what we ordered, and gochujang bulgogi (Korean red hot pepper paste bulgogi), my guess is it's super spicy, but I have never tried it.

When I read the menu, I new that I wanted to try the pabulgogi because
1) I don't like samgyupsal, in the 8+ months I have lived in Korea in the past 1.5 years, I have never eaten samgyupsal.
2) I like gochujang, but I have been trying to cut back on my spicy food intake AND because my mom cannot eat spicy food. 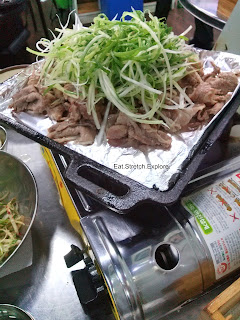 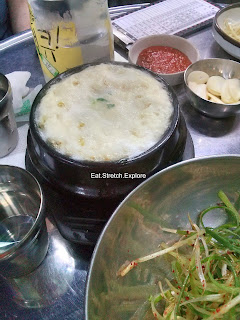 As with all other Korean meals, you get the banchan (side dishes, we got bean sprouts, kimchi, and the fish paste sheets). You also get leaves for making the meat wraps, more green onion shreds (I explained in the previous post) and garlic.

Here, you also get gyeranjjim (steamed egg) included. Actually, I was SUPER craving steamed egg at work, so I made some for dinner and decided I would write about this meal. Typically, you have to pay about 4,000KRW for the steamed egg, so it's great that it comes with the meal. I don't know if we got the big dish of steamed egg because my parents were obviously foreigners or if it was because there were three of us. All I know is that one of the ajummas was going to give us a smaller serving and then this other ajumma came out of nowhere and started telling the other to give us the big serving. Either way, I was happy because I had actually been looking forward to the egg more than the meat.

In case you have never had gyeran jjim, it's really just a steamed egg, but usually there is some sort of fish stock in it, green onions, and spicy peppers. It's quite easy to make, maybe I'll post a recipe later since it's pretty much one of the only things I can cook.

TIPS:
This place closes at 10 PM. We arrived about 9:40 and the ajumma made sure to tell me that we would only have about 20~30 minutes to eat. So, maybe try to show up earlier, but they won't kick you out when the clock strikes 10, they will just not serve any new customers.

There are only a few tables, maybe around 10 tables and it's usually pretty busy.

I read on some Korean blogs that they have a really good lunch set special menu, so you may want to check that out, but because of the location, I'm sure it's pretty busy with office workers at the lunch hour.

Also, if you want rice, you should order it separately. Remember to ask for gong-gi bap. You can also ask them for bibim gong-gi and they will make a fried rice mix with the leftover sauce from your meat and it will be delicious, I'm sure.

Travel suggestions:
Since this is located near Seoul City Hall station, it is perfect to add to your itinerary for a day when you are around the City Hall area, Gwanghwamun, Gyungbok Palace, Deoksu Palace, Namdaemun Market, Myungdong since they are all within walking distance. 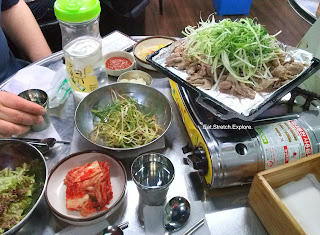 Location:
Walk straight out of exit 8 of City Hall Station (line 1, 2). Walk straight until you get to the first alley way. There should be an Olleh (KT Telecom) store on your left and you should also see (and probably smell) a Dul Dul (Two Two) Chicken shop. Turn left at this alleyway. You should see it.

It may seem like you are not in the right place, but this is REALLY down an alleyway.